Yesterday, A picture of a squirrel eating a KitKat was printed in the York Press.  It struck us that squirrels eating KitKats was a bad thing.  Here are seven reasons why.

1.  Health. As humorists, we don’t know much about the internal workings of squirrels (or about the economy of Papua New Guinea for that matter, though that is less relevant here), but we’re fairly certain that chocolate is bad for squirrels.  In fact, it could be deadly for them.

2.  Corpses. And parks littered with the corpses of dead KitKat-eating squirrels aren’t fun places.  In fact, they’re probably hazardous to park-goers; just try chasing a frisbee when there are many dead squirrels underfoot.  Or get a dog, they chase frisbees for you.  And probably eat squirrel corpses.  But they poo everywhere – and chase writers – and no one wants that.  Also, the park of dead squirrels would probably…

3.  Upset The Girl. And no one wants to upset the girl.

4.  Squirrel Obesity. Although grey squirrels are American, and we should expect them to be on the portly side, they will only be made fatter by the consumption of chocolate confections.  And the spectre of obese squirrels lumbering around the nations’ parks is not a desirable one.  In fact…

5.  It Could Be Injurious To Flora. And this would upset the girl.  And no one wants to upset the girl (she’s not called Flora, by the way).

6.  The Unknown. We just don’t know what effect eating KitKats could have on squirrels.  Partly because this is a new phenomena and there is insufficient data available to construct a meaningful hypothesis, and partly because we would rather do almost anything than conduct a scientific study.  Or maths.  Or whatever the hell it is.  Anyway, our cursory investigations have led us to conclude that eating KitKats could cause the grey squirrel to mutate into a giant submarine-eating creature that would constitute a hazard to shipping.* 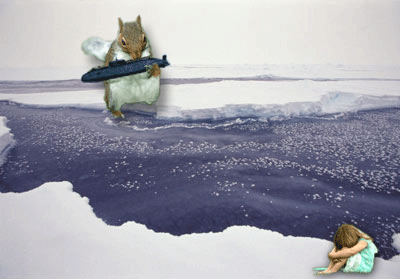 7.  And This Would Upset The Girl. And no one wants to upset the girl.

*Our study mostly consisted of thinking hmm, what could we photoshop into the hands of the squirrel?

**7 Reasons (.org) would like to make it clear that we do not believe that Nestle are a large, evil corporation that are attempting to achieve world domination by causing squirrels to mutate into giant submarine-eating creatures that dwell at the North Pole.***

***Do not read that with a sarcastic tone, it totally undermines the important disclaimer.

****Picture “borrowed” from York Press.  But if you check the original article, you can see that we’ve put it back exactly where we found it.