Today’s guest post comes from Bolton-based musician, record-label-owner and music-promoter Brad B. Wood.  His highly acclaimed band, Merchandise, are releasing their fifth album soon, which could mean any time in the next two years.  You can check out the brilliant Merchandise website here, it’ll even play you a song while you read this.  You can also find Brad twittering here.  Twitter will not play you a song. 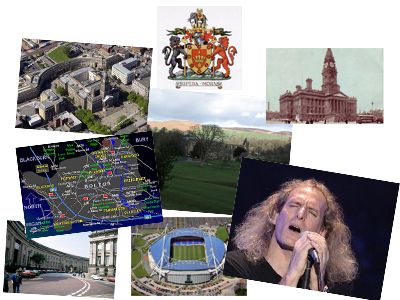 2.  Pies. Yes I know Wigan has the reputation, but they’re something of a delicacy round here too.  There are many great pie shops including the excellent Ye Olde Pastie Shoppe, Wilson’s in Kearsley and, of course, the locally ubiquitous Greenhalgh’s (a pronunciation nightmare for visitors).  My favourite, Villas on Tonge Moor, has sadly closed – not due to any lack of custom on my part.  I got told off the other week for saying complimentary things about Carr’s pasties during an interview on Bolton FM – strange folk there.  I just mentioned how they make a pasty barm so well (a pasty in a buttered bread roll – great!).  You don’t have to travel to Scotland to find fine cuisine, you know.  You can also find it in Bolton.

3.  Bradshaw fireworks display.  A grand evening out.  Gloriously crap, and all the more fun for it. One year, the countdown to the start of the display ended with no fireworks.  The tannoy announcer asked Cyril (the man in charge of the blue touch-paper) what he was up to several times before he eventually graced us with what could be the most randomly choreographed display in pyrotechnic history.  After 25 minutes of mistimed banging and whooshing, bizarre colour combinations and fireworks shooting in all directions, the display concluded with the piece-de-resistance, the words “..od ..ght” illuminated in fireworks.

4.  Place names. Well, the best of the lot has to be Knob End, Upper Ramsbottom is just over the hill too (There’s a new game,  “Increase the Innuendo by Placing Bolton Place Names Next to Each Other in a Sentence.”)  We also specialise in place-names that are unpronounceable to visitors, such as Daubhill (Dobble), and place-names with a right lot of apostrophes:  Hall I’ th’ Wood, Top O’ Th’ Brow etc.  During a fun game of “Get the Bolton Place Name in a Film Title” (this is how we roll) these were the best: Doffcockerlipse Now, Daubhill Impact (see pronunciation above), Lostock and Two Smoking Barrels, When Harry Breightmet Sally and The Bradshawshank Redemption. That whiled away a long motorway journey of twenty-nine miles, twenty-nine long miles . . . and there were some much worse suggestions.

5. Comedy. Bolton is a funny place, or at least our residents make it one.  The local character is to look for the funny; we’re also known for our friendliness to strangers.  Genuine business names include “Big Baps and Nice Buns” (a sandwich shop) and Softies Hard Stuff (I think you can guess what he sells).  Among our professional comics are Peter Kay, Dave Spikey, Justin Moorehouse, Hovis Presley , Paddy McGuinness and the perennial panto favourite, Stu “I could crush a grape” Francis.  We also employ Gary Megson.

6.  Bolton Wanderers. Founder members of the Football League and four time FA cup winners – including the White Horse final in 1923 – the first at the old Wembley stadium. We were involved in the first game with nets, which took place between Bolton and Everton (possibly the two teams least likely to need them).  And now we’ve come through that dark patch in the eighties where we had to sell one end of the stadium to a supermarket, “We’re the one and only Wanderers!” (except for ones beginning with W)

7.  Real ale. Like everywhere, Bolton has a strip of pubs which are less safe than the places you hear about in the international news.  However, if you drive out a little, or have a bit of nous, you can avoid everything that’s fetid and wrong with contemporary society, and visit great pubs which make you proud to be British (in a nice way, not a Nick Griffin way).  The joy of pubs where folk actually talk to each other is lost on Southerners – Christ knows how they make friends.  Go to the No Name (it’s a pub without a name), The Dog and Partridge, The Sweet Green Tavern, The Hen and Chickens, The Old Man and Scythe or The Pack Horse at Affetside and you won’t be disappointed.  You may even make a friend.