It is generally accepted that war is bad (although it has given us some amazing films). The American poet, Eve Merriam, once said, ‘I dream of giving birth to a child who will ask, “Mother, what was war?”‘ Given that she died in 1992, I suspect the odds of this happening are long. But it could have been very different. If only certain people had put down the dagger and picked up the dice. 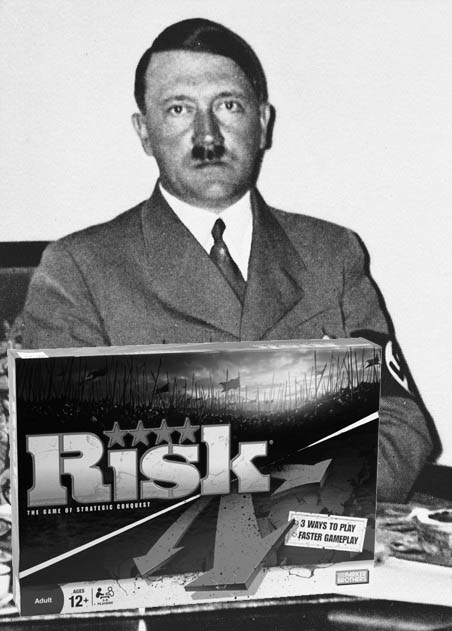 1.  Cowboys, Red Indians and Buckaroo. Everything I know about the Wild West I have learnt from historical documentaries staring John Wayne. And one theme is clear. Both the Red Indians and the Cowboys had horses. Another theme is that there was a lot of death. Sadly these documentaries rarely went into why such things were occurring. Half the time it seemed to be women or because they were bored. While one can admire they chivalric values of fighting over a woman, I can’t see the point in shooting someone just because you have nothing better to do. What a waste of a bullet. Or arrow. A much better use of time would have been to have played Buckaroo. Whoever got the saddle, satchel and cowboy hat on the horse without it bucking got a night with the one wearing the yellow ribbon. Or a piece of land. Who cares? There was loads of it.

2.  The House Of Lancaster, The House Of York and Happy Families. In many respects the War Of The Roses was a disappointing war in that it featured little more than infighting. A great shame given that had both Houses joined forces they could have concentrated their energies on more pressing engagements. Like invading France. As it was though, both houses decided to fight each other to determine who should hold the throne of England. There was a lot of slapping and stabbing and shooting for thirty years until finally Henry Tudor (House of Lancaster) married Elizabeth of York (House of York), reconciled any differences between the two families and became King. How pathetically politically correct. They could have done that at the start. Or, even better, played Happy Families. Whoever got the most cards, got the throne. Simple. That particular history lesson would have been much shorter too. Which would have been a bonus.

3.  The Kingdom Of Great Britain, Those Not Happy With The Kingdom Of Great Britain and Monopoly. In 1775 those occupying the British colonies in North America got a bit fed up with being under British rule. As a result, a year later, they thought they’d declare independence. This riled the Brits and so they had a bit of a war. That, at least, is the abridged version.* The Brits lost. And in the process ended up giving away lots of territory (including far too much to Spain and France). Oh and they also gave away blood. Lots of it. As a result, today we are in the ridiculous position of the United States of America owning all parts of the United States of America. And serving something like 200 coffees to every one tea. This is clearly wrong. Had the Monopoly board been whipped out in 1776 I would like to think we’d have been in the much better position of Great Britain owning at least New York and Boston and quite possibly the gas works too.

4.  Napoleon and Battleships. Let’s not mince our words here, Napoleon was a muppet. He was never going to beat the British. He was French and the British were British. In fact, they probably still are. That’s just general knowledge. Unfortunately Napoleon wasn’t a general. He was an Emperor. And just like the Emperor penguin he was short, fat and waddled. That sort of stature was never going to win him the Battle Of Trafalgar. Especially as he saw fit to watch on from afar while he sent Pierre de Villeneuve off to fight Nelson. Pierre lost. If indeed Napoleon was the genius in the operational art of war as many have said, then he would almost certainly have had more chance if he and Nelson had sat down with Battleships. Given that Nelson lacked both a right arm and a right eye, you would have probably made Napoleon favourite for the contest. (Though he would have still lost. He was French).

5.  Hitler and Risk. Just like Napoleon, Hitler was short. And just like Napoleon, he had a funny walk. Such mannerisms don’t suit dictators and for those reasons – although not alone – he quite rightly lost the second World War. He was also a twat. Anyway, had Hitler got Churchill, Roosevelt, de Gaulle, Stalin, Mussolini, Hirohito and Antonescu round to his bunker, the whole of World War II could have been decided in one night over one game of Risk. And even if Hitler had cleared up, it wouldn’t have mattered. The others could have shot him. Or tickled him to death. So we may never have heard the immortal words, ‘We shall fight on the beaches…’ but we would have had, ‘What goes on in the bunker, stays in the bunker’.

6.  Richard Nixon, Leonid Brezhnev and Chess. The Cold War must be the scariest non-war of all time. Being in Britain in the 80’s and having access to an atlas, I had worked out that I was right in the middle of this conflict. Should the USSR launch a Nuclear missile and the USA counter, the collision was going to happen somewhere over Sussex. Bugger. Although I didn’t think of it at the time (and instead hid under my duvet) I wish Nixon and Brezhnev had played this thing out on a chess board some ten years before. It could have been like Booby Fischer verses Boris Spasky. Though instead of the title of the World Chess Championship at stake, more important things could be decided. Like who got to win the Nuclear Arms race.

7.  George Bush, Tony Blair, Saddam Hussein and Pictionary. I suppose there’ll always be something of the Lord Lucan about weapons of mass destruction. Although, admittedly, only one of them existed. Had George, Tony and Saddam all got round a white board one day then I expect G&T could have got the proof they really required. George could have drawn a missile and something that resembled a weapon of mass destruction and Saddam would had had to guess what it was. If he had guessed correctly they’d know he had them. (Obviously you wouldn’t be able to recognise a weapon of mass destruction if you didn’t know what one was). Once G&T had the proof, they could have given Saddam 48 hours to get home and lock the door before they dropped the first bomb. Or, if he didn’t know what it was, everyone could have gone home. Or to Afghanistan.

*If you have stumbled across this page whilst writing your history project, I strongly advise you not to cut and paste.**

**Actually, that applies to all of the above.