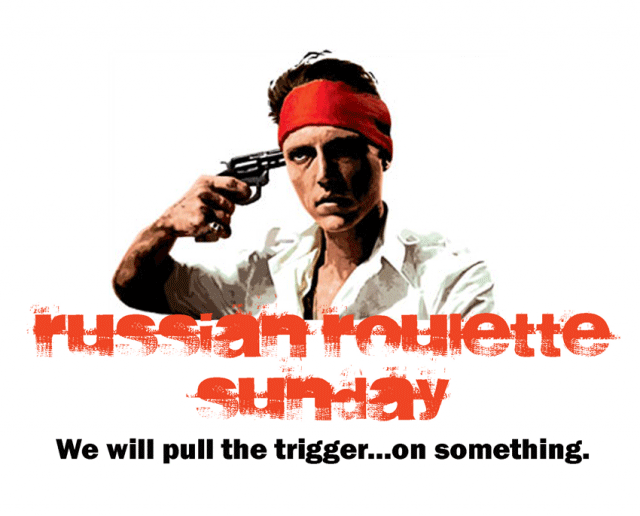 Hello, it’s a Jon week. In terms of Russian Roulette Sunday anyway. In terms of general living, every week is a Jon week. If it wasn’t I’d be dead or something. And no one wants that. Especially Marc. All the reasons and all the lemons would drive him insane. So, anyway, back to today. If you were with us in January, you may remember we took a look at some of the words Marc and I have exchanged with each other in the making of 7 Reasons. Have a read here if you were washing your hair that day. Not only was it funny, it was very easy to write. Which is basically our ideal kind of post. So we’ve decided to do it again. Right here. Right now. Enjoy.

“I haven’t done the same, that would be lazy and unhelpful.”

“I am now hungover and not writing furiously about lemons.”

“I may have something sensible to say later.”

“I think camp bingo is like gay bingo. But in a field.”

“It wasn’t supposed to happen this way.”

“Well done on the lemons.”

“7 Reasons Guy Fawkes Should Have Been Called Lady Spoons?”

“I’d like to point out that a man in Russia found your socks and sandals piece yesterday.”

“If I take the name of York’s most famous son (his birthplace is a four minute walk from here) in vain, an angry mob will probably form outside my door.”

“I shall have an Alka-Seltzer and some lemon juice.”

“In hindsight, I probably shouldn’t have put it straight in. That’s ovens for you though.”

“Would you be totally insulted if I said I didn’t?”

“I was writing about dough balls. It does happen occasionally.”

“The only thing I liked about it was the end. A bit like when my parents used to listen to the Archers at dinner.”

“How about a cat hoverboard?”

“Oh, and Esquire magazine bought David Baddiel lunch today.  Have they said anything about buying us lunch?”

“Excuse me a minute, I have a Jehovah Witness shaped problem.”

“I’m not sure it’s totally necessary, but it looks pretty. A bit like Kate Moss.”

“Let me know if you need a lemon.”

“I have added my thoughts in curly lines that look like sperm.”

“I tried to write a piece about beards once.”

“Something went wrong. I think I shut it too tightly.”

“I’m off to the greenhouse of neurosis.”

“I’ve tried shouting at it and that isn’t working.”

“A boy just fell off his bike. I’m laughing. Shall I go and pick him up?”

“That’s like liking Hitler more than Atilla The Hun and New Kids On The Block.”

“Ken, when in doubt, pretend to be a grown-up.  It never fails.”

“I don’t have an issue with it. It’s probably the sadist in me. Or the beer.”

“I hadn’t forgotten that you’re going to Rome, as in my mind it’s a tiramisu-related-event.”

“It looked funny and I googled it.”