Guest Post: 7 Reasons To Take Part In The Next Fancy Dress Marathon

For most people, the mere idea of running a 26-mile marathon is liable to induce feelings of discomfort and possibly a little unwanted sweating. But to do it dressed as a giant vegetable? That’s just silly. So why do people do it?

1.  Fun. Fancy dress is undoubtedly fun. Whether hiring costumes from a shop or assembling them DIY-style, the possibilities are almost endless. Runners have appeared as superheroes, vehicles, plants, planets and beasts of all shapes and sizes.

On the day, the camaraderie between those in fancy dress makes the experience highly enjoyable. The crowds always give an extra cheer for those who’ve made an effort. The fancy dress crew provide a much-needed antidote to the frowning seriousness of the professional runners.

2.  Charity. Many marathons require that runners raise a certain amount of money for charity in order to enter. Unfortunately, with the global economy in exceedingly poor shape, it’s harder than ever to convince people to donate. Research has shown that people are far more likely to give to charity if the asker can make them smile. What better way than presenting them with the mental image of a giant sweaty sausage?

3.  Personal Achievement. Everyone needs a goal in life. For some, it’s finding the nearest take-away. For others, it’s a matter of finding a suitable challenge. Running a marathon is one of the many endurance-style feats undertaken by those hoping to better themselves. For those who’ve already finished a marathon, doing another one – but this time wearing fancy dress – is the logical next step. 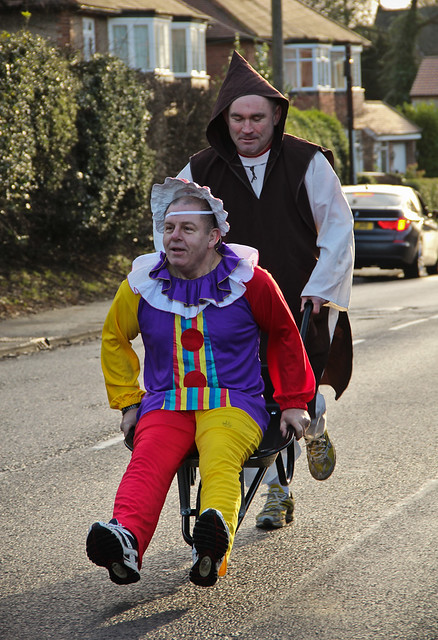 5.  Health. The resting heart rate of the average person is approximately 80 beats a minute. For fitter people, such as those entering marathons, it can be as low as 50 beats a minute. To get super fit, people try to keep their heart rate within a target zone for sustained periods. This is easier in fancy dress, where the extra exertion keeps the heart pumping.

Other health benefits from donning a costume include rapid calorie burning and an increase in high-density lipoprotein – the so-called ‘good’ cholesterol. For those trying to detox, wearing fancy dress will almost double the amount of fluid lost through sweating.

6.  Kudos. New acquaintances at the pub will be amazed, or confused, by the commitment required to run far wearing a lot. Whatever the response, it’s a good start to a conversation. And any potential love interests will always choose enormous running chickens over regularly dressed people.

7.  Masochism. Let’s face it, some people like a little suffering. What better way to suffer than to run for miles clad head-to-toe in faux fur, plastic and other non-breathable man-made materials? When the Sunday Telegraph newspaper monitored a man running in a chicken suit, it found that his body temperature rose to 40C (104F). Tortuous indeed.