7 Reasons That It’s Not As Bad As You Think

Okay!  This is a humour site and my country’s been on fire for the last couple of days, so there’s only really one thing that I can write about today, so let’s be funny about the riots.  Except, no.  That isn’t really going to work, is it?  There are people out there losing their homes and livelihoods as a result of them and I’m sure we all have friends and family that are affected, so writing a lot of nonsense about how good the coverage of the riots will look on a brand new (and free) HD television, or how phoning 999 to report themselves will be so much easier now that everyone with a hooded top has an iPhone would seem trite and foolish.  Fortunately, though, while events may have saddened me and affected my sense of humour, they haven’t affected my spirit, my love of humanity and my wonderment at peoples’ innate capacity for good and their astonishing ingenuity.  Accordingly, here are seven reasons that it’s not as bad as you think.

1.  Innovative Brilliance.  “Necessity is the mother of invention” said Plato (in Greek, probably) and our brave and hard-working police force need tea.  These lovely people have taken the time out to make them some.  They’ve also devised the absolute best way to use a riot shield.  Is there an image that captures Britain’s spirit better than this? 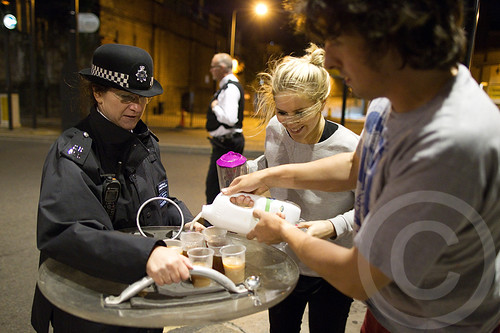 2.  Collective Brilliance.  The riots have demonstrated the country’s capacity for collective brilliance.  Many, many people decided that they weren’t going to let their (our) streets be wrecked by the mindless idiocy of a few.  The Twitter account @riotcleanup was set up and it now has almost 80,000 followers.  That’s more people than have been involved in rioting and looting.  People have got together in overwhelming numbers for the power of good.  This picture by @lawcol888 is wonderfully uplifting.

3.  Individual Brilliance.  Oscar Levant said that there was “a fine line between genius and insanity” and, from that very line, this woman bravely berates rioters and looters.  That there are people in this country courageous and brilliant enough to stand up to a mob so eloquently is wonderful.

4.  Expectation-Altering-Brilliance.  Stan Collymore (What?  Wait, he’s gone mad.  He’s been lauding examples of brilliance and now he’s writing about Stan Collymore!?), former Premier League footballer and someone that I have occasionally thought of as a bit of an idiot over the years tweeted this earlier:

5.  Technological Brilliance.  It’s been a while since Britain has seen rioting on this scale and there’ve been a lot of technological advances in the meantime, so it’s fair to say that any online response to it was going to be breaking new ground.  The innovative use of social media as a response to events has been staggering.  Almost as soon as disturbances began in Birmingham yesterday, the rather brilliant @caseyrain set up a Birmingham Riots Tumblr account to document events in the second city while the attention of the national media was focussed on London.  There have been many, many other wonderful examples of innovative use of social media, with Facebook groups (,http://www.facebook.com/londoncleanup), Tumblr accounts (http://catchalooter.tumblr.com/) and websites (http://www.londonrioters.co.uk/identify/) used to promote various causes and to mobilise people into various types of action.  That people have used the internet and social media so effectively to mobilize themselves into making our streets better and catching the looters is both marvellous and demonstrative of a laudable degree of collective will and creativity.  Oh, and the looters are helping by using Facebook too.

6.  Just Utter Brilliance.  Don’t want the rioting and looting to ruin your evening?  Simple.  Just pretend it isn’t happening.  “Riot, what riot?  I say, could you pass the port, my good man?”

7.  Historical Brilliance.  The oft-cited high-water-mark of societal unity, sacrifice and collective accomplishment was the way that Britain dealt with the blitz during World War II.  The blitz spirit is something that is often mentioned in articles that decry modern society to illustrate a decline in standards and unity, and many commentators on the current situation have spoken of the riots as being symptomatic of a breakdown in society.  But rioting and looting are nothing new.  During the blitz – that exalted time when our society is seen as having been at its strongest and most cohesive – with a war-depreciated police force and abundance of opportunity there was widespread looting and criminality too.  The truth is that there has always been a sociopathic minority in our country ready to exploit any weakness (lack of police cover, evacuated streets etc) for their own personal gain, regardless of the consequences to others.  That we don’t let the looting during the blitz affect the high regard in which we hold the selfless sacrifice of the majority during the second world war speaks volumes about us.  History tells us that it’s possible to have a strong, dynamic and caring society despite having a minor element that riots and loots.  And the way that the majority of Britain has reacted today to the events of the past few days suggests that little has changed.  That is heartening.