We were close to the end of the world yesterday and today we are mere hours away from a good rapturing. In light of this I really admire you for coming back to 7 Reasons when you should probably be saying goodbye to your loved ones. In keeping with the end of the world theme, today’s guest post is an extraordinary look into another seven ways the world might end today. It’s written by Greg Buckskin, a writer and blogger for Comcast.USDirect.com – home to Comcast Cable Deals. At least that’s what he does when he’s not skiing the Utah powder. After the nice picture below, it’ll be Greg. 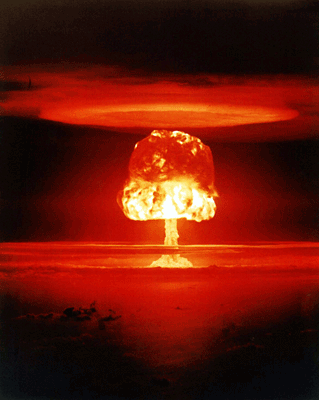 For many fundamentalist Christians, May 21st will be their last day at work—or on the planet for that matter. Harold Camping, owner of the $100 million Family Radio Christian network, has predicted that May 21st is the day of the rapture—the end of the world when the righteous will be taken to heaven and the wicked will be left here on earth wallowing in misery until October 21st, when the earth will finally be destroyed for good.

Although Camping’s predictions have failed in the past (he also predicted that the world would end in 1994—oops), he has many followers who are backing him up, selling their homes, quitting their jobs, and budgeting their last cent to run out on May 21st.

Who knows, maybe the world will end on May 21st. I’ve been wrong before; I thought Arnold and Maria would be together forever. But most likely, May 21st will be just like any other day, except for the lamenting cries of those who went into huge debt so they could live it up until the 21st and thought they’d never have to pay it back. However, there are tons of other ‘real’ ways the world could end this weekend, or even in the next half hour. These events would be so random that I’ll bet none of us ever even pay it much mind.

1.  Nuclear War. Stanford Professor Emeritus Martin Hellman figures that at any given moment there is about a 10% chance of the world ending in nuclear war. That’s a bigger percentage than most of us have of dying from common forms of cancer—more than 10 times bigger in most cases. There are still over 25,000 nuclear weapons in existence today. North Korea, Iran, some pissed off fundamentalist who finds one of Sadam’s WMDs buried in the desert somewhere—theses are all likely candidates and extremely unpredictable. How is your bomb shelter coming along?

2.  Asteroid. We all know that Armageddon was a completely unrealistic movie, right? I mean who would hire an oil rig captain to blow up an asteroid? Well, it may not be so far from the truth. Right now scientists from NASA and other organizations around the globe are predicting that asteroid 1999 RQ36 could have as big as a 1/1000 chance of hitting earth in 2182. When you think about the vastness of the universe, that’s actually pretty good odds. If a big asteroid took out the dinosaurs, why couldn’t we be next.

3.  Super Volcano. We all learned about volcanoes in 3rd grade science class, but most of that curriculum focused on places like Hawaii and Mt. Saint Helens. Chances are your teacher didn’t tell you about the super volcano that is Yellowstone National Park. Only fairly recently have scientists discovered that Yellowstone is a giant caldera, an underground volcano where magma has been building for hundreds of thousands of years. The last time a super volcano erupted (75,000 years ago in Sumatra), it exploded with the force of over 10,000 Mt. Saint Helens, covered the world with ash and brought about a global ice age. According to calculations, the Yellowstone caldera explodes about once every 600,000 years. The last explosion was over 640,000 years ago. Yikes!

4.  Disease. Bird flu? Swine flu? Forget about it. What about airborne HIV? Or some new disease that has not even developed yet? If you’ve ever read The Andromeda Strain you know that all it takes is for one virus to mutate in exactly the right way to kill us all instantly. Then the zombie apocalypse hits, and it’s every man for himself.

5.  Gamma Ray Burst. Gamma ray bursts have been observed in far distant galaxies for many years. A Gamma ray burst generally happens as a star goes supenova and can release more energy in ten milliseconds than our sun will release over its 10 billion year lifetime. Most of the observed bursts are in galaxies that are billions of light years from earth. But what if a closer star decided to explode (or our sun) and send a beam of high-energy gamma rays our way? We’d be space dust before any of us even knew what happened.

6.  Global Warming. Global warming is a slow phenomenon compared to our short human lives, but it can be a rather quick event in the earth’s life. A warmer planet won’t simply mean that we can’t wear long pants anymore, it will change the entire way the planet functions. It will disrupt plant growth, extend the life cycle of many animals and insects, especially those that live in tropical regions and carry diseases like malaria. It also increases air pollution and causes flooding and wildfires and increases the size a magnitude of tropical storms—think Katrina, but on a scale that would cover all of North America. Currently, about 150,000 deaths can be attributed to global warming. If we don’t watch out, we could face a slow death by a warming planet.

7.  Big Robots From Outer Space. So this one is a little more far-fetched. But astronomers are discovering new planets all the time, some that could even support life like earth’s. In fact, recently, Gliese 581g—a planet similar to earth—was discovered only 20 light-years from our solar system. Who is to say that life does not exist elsewhere in the cosmos, that they may be more technologically advanced than ourselves, and can travel the stars? And if there is one thing I’ve learned from watching movies, it’s that aliens rarely come to earth just to see what’s here. They usually (much like we are doing right now) have destroyed their own planet and are looking for a new home. And they don’t take too kindly to the natives. Will they send giant robots to annihilate us or will it be pod people to snatch our bodies? I don’t know. All I can say is, “watch the skies.”