Hello, I’m back. I guess, in the grand scheme of things, that is not enough to make your Tuesday. As a result I shall also furnish your day with a 7 Reasons post. You may have heard that Sir Elton John has been having a pop at the songwriters of today. According to the BBC, he thinks they’re awful. ‘Fair enough’, I thought, ‘but let’s just have a listen to some of Elton’s stuff to find out how much better he was’. The results are staggering. Here are 7 Reasons Elton should probably listen to his Greatest Hits again.* 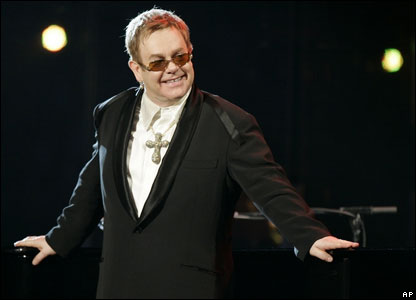 1. Song – Your Song. Lyric – “I don’t have much money but boy if I did, I’d buy a big house where we both could live.” It’s hardly the stuff of Chaucer, Hardy or Dickens is it?

2.  Song – Crocodile Rock. Lyric – “But the biggest kick I ever got, was doing a thing called the Crocodile Rock, while the other kids were rocking round the clock, we were hopping and bopping to the Crocodile Rock.” I know this song is self-referential, but even so, it’s still a load of nonsense. I wouldn’t have thought the hallmark of a great songwriter was to make up some stupid dance name. I suspect Elton would laugh in Marc’s face if Mr Fearns approached him with the 7 Reasons Shuffle. Especially if he was wearing my mask.

3.  Song – Daniel. Lyric – “Daniel is traveling tonight on a plane, I can see the red tail lights heading for Spain.” How convenient Daniel was going to Spain. Mind you, I suppose if he had been going to Derry he could have caught the ferry. Just a shame they don’t do a tram to Iran really.

4.  Song – Saturday Night’s Alright For Fighting. Lyric – “It’s getting late have you seen my mates, Ma tell me when the boys get here, it’s seven o’clock and I want to rock, want to get a belly full of beer.” Hardly the sort of message one wants to be sending out. Elton John and Grand Theft Auto have a lot to answer for.

5.  Song – Don’t Let The Sun Go Down On Me. Lyric – All of them. This song is a cliche. From start to finish. In that respect, the songwriting is awful. It also doesn’t address the solution to the sun going down, which, in most parts of the world, is to switch on the light. Or light a candle. Actually, I’m glad Elton never lit a candle, he’d have probably written a song about it.

6.  Song – Honky Cat. Lyric – “When I look back, boy I must have been green, bopping in the country, fishing in a stream.” I’m not a cynic, but I find it very hard to believe that anyone who is green and bops in the country also goes down to fish in the stream. I think it has more to do with the fact that it rhymes. Personally, for all the sense this song makes, I would have preferred it to have been, ‘When I look back, yowzer I must have been blond, chugging in the hamlet, pissing in a pond’. But I guess the tempo is not quite the same with that is it?

7.  Song – Rocket Man. Lyric – “Mars ain’t the kind of place to raise your kids.” No, neither is Preston. Talk about stating the bloody obvious. And whose idea was it to write a song about a fictional astronaut going on a fictional journey to Mars anyway?

*Edit: In response to all of you who told me Bernie Taupin wrote the lyrics and not Elton, yes, I do know this. Elton still saw the lyrics fit enough to sing though. As a result, this post passes muster.