Home » Posts » 7 Reasons to Make Your own Pizza

7 Reasons to Make Your own Pizza

Making your own pizza is amazing.  It’s fun, produces tasty results, and is a more self-satisfying activity than cooking almost anything else, no matter how complicated or tasty.  Here are seven reasons to make your own pizza. 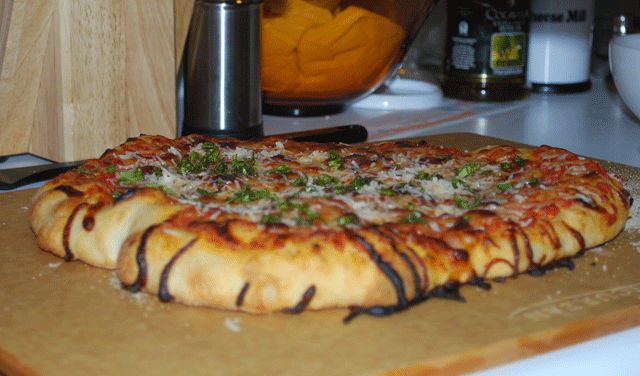 1.  Environment. If you make your own pizza, then chances are that you’ll be doing it in your own home.  This is good.  Your own home is nicer than visiting your local takeaway and you probably won’t see a fight there.  You also won’t see overweight couples attired in sportswear eating something unidentifiable from a polystyrene box, and there’ll be little chance of witnessing kebab-meat rotating on a pole, which will prevent nightmares.  You can order a pizza by phone, of course, but then a moped just takes it to someone else’s house instead.  Someone in New Earswick (we have no idea where this is either) gets all of our pizzas.  It’s a reciprocal arrangement; we get all of their taxis.  Anyway, I digress; not having to visit a takeaway to enjoy a pizza at home will make you feel ever so slightly smug.

2.  Bonding. Making pizzas is something that you and your partner can do together.  You can also make pizzas with children, who seem to find the whole experience very enjoyable indeed.  They’ll have loads of fun putting the ingredients on top of the pizza and, however they arrange it, it will always resemble something rude, which will give you a laugh.  Of course, you won’t be able to share the joke with them, and being in on the joke always makes people feel smug.

3.  Healthy. Because you’re choosing your own ingredients, your pizza can be healthy.  The total cheese content can be limited to a few slices of Buffalo mozzarella, rather than coming loaded with plastic-y processed cheese, more salt than you would expect to find in a minor ocean, and weird globules of fat sitting on top of it.  Eating healthy pizza will prolong your life; meaning that you can be smug for longer.

4.  Garnish. Rather than the flavourless offerings of the takeaway or the supermarket, your homemade pizza can be topped with herbs from your own garden, which will taste fresh and great.  Using herbs from your own garden will elevate you to a whole new level of smuggery: You may even begin to pronounce herbs, ‘erbs, which will propel you serenely across the line between being merely smug and being a smug git.

5.  Cost. The ingredients for a home-made pizza cost far less than buying a pre-made pizza from a supermarket or takeaway.   And eventually you can spend the money you’ve saved on a yurt, a folding bicycle, a chimenea, orange trousers or any other must-have accoutrement that takes your fancy.

6.  Dough. If you have a bread-maker, you can also make your own dough really easily.  You can make it with brown or wholemeal flour, instead of the ubiquitous white stuff and you can also spin it around your head and generally hurl it about your kitchen, while pretending to be Italian.  This is more fun than almost anything.  David Cameron has a bread-maker.

7.  Self-Sufficiency. A pizza-topping can be constructed from many ingredients that you can grow in your garden.  And if you get a buffalo, you’ll be almost entirely self-sufficient.  Anyone know how to milk one of these?