Home » Top Posts » 7 Reasons That The Nautical Look Is Objectionable

7 Reasons That The Nautical Look Is Objectionable

1.  Saturation Point. Too much of a thing is never good – which is why I’m editing this with a hangover – and the nautical look is everywhere.  It’s finally reached saturation point and now it seems that almost every woman in the UK is dressed as a sailor.  Now, there’s nothing wrong with women dressing as sailors, or anything else that takes their fancy, but that doesn’t mean that every woman should dress as one.  Wouldn’t it be nice to see some of them dressing in outfits without horizontal stripes and rope motifs?  Perhaps as spacewomen or conquistadors.  Or Minnie Mouse.  Or just as themselves.  Our high streets look like a production of HMS Pinafore at the moment.

2.  Confusion. It’s confusing.  Sailors are sailors: we can tell that by their uniforms and their weatherbeaten faces.  Women are women: we can tell that because they smell nice and have soft hands.  But the nautical look blurs the issue somewhat.  Allow me to demonstrate using science…or maths (It’s definitely one of those things). 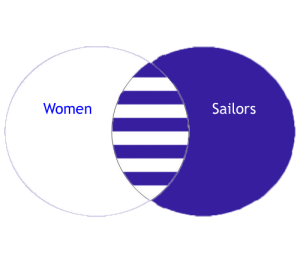 A Venn diagram which illustrates the inherent confusion caused by the nautical look.

3.  Anchor. When choosing an outfit with a decorative motif, is it really wise to choose one that rhymes with wanker?  No, it isn’t.  Because people will take the piss.  Not having an anchor on your breast pocket  insulates you from jibes and cruel humour.  The same goes for not having a ship on your handbag.

4.  The Next Step. Many women are currently dressing as sailors, but what if this fad takes a slight twist?  What if sailors start dressing as women?  It’s confusing enough already, do we really need that?

5.  Weather. Now I’m sure the nautical look would look fine and dandy when worn on the back of a motor-yacht moored in Porta Banus or Cannes.  But it isn’t.  It’s being worn in Manchester, where it rains all summer.  And, unlike real sailors, people are wearing stuff that isn’t waterproof.  I saw people attired in faux-nautical gear sheltering from rain in  a bus shelter yesterday.  They looked foolish.

6. Do It Properly. The nautical look is being done in a half-hearted manner.  Wearing a stripy top under a blue jacket is lame.  If you want to do the nautical look well, wear a tricorn hat, an eye-patch, a peg-leg, a hand-hook; carry a parrot around.  Wear vast epaulettes dripping with gold braid and the full cuff insignia of an Admiral; accessorise your outfit with a telescope or a sextant.  Ditch your umbrella in favour of a Sowester hat, oilskins and a life-jacket.  Grow a beard.  This woman demonstrates how to pull off the nautical look properly.

Or you could do what this man did and dress up as a mermaid before sinking without trace.  That’s true dedication to the nautical look.