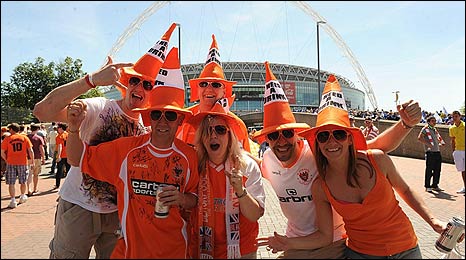 As the Championship play-off concluded on Saturday gone and the seaside town of Blackpool began to celebrate promotion to the Premier League, I realised I have several reasons to agree with them achieving this success.

In fact I have SEVEN reasons, which back up my originally just wanting ‘The Tangerines’ to win the play-off final against Cardiff City, the original reason being simply the romance of such an achievement.

Now I could back it up with my seven reasons, so here goes…

1. Orange.  Unlike a certain Graham Taylor, I do like orange, it is a colour which is synonymous with the game of football and a welcome addition to the top flight of English football.

The great Dutch team of the 1970′s, the amazing skills of the Blackpool side containing Sir Stanley Matthews in the 1950′s, the infamous and well missed orange footballs when the snow had laid on a winters game.

This is a true football colour and the Seasiders’ faithful will brighten up many a dull away ground in the coming season.

2. Memories.  Oh the memories, I have only been to Blackpool once, it’s a fair trek from Middlesbrough you know!! But I had a cracking weekend, admittedly this was more so due to the fact I was 17 and every pub served us without hesitation.

But fond memories all the same. The town appears to have deteriorated over the past decade and the input of the Premier League wealth will hopefully aid in returning the place to its former glories.

If you’ve never been and you go based on this guest post, I am in no-way responsible for what happens to you in Blackpool, hope that covers me, should do, shouldn’t it?

3. Ian Holloway (pictured below).  A genuine football man, a genuinely likeable man and a genuine family man. If you don’t like Olly (Ian Holloway’s nickname) then personally there has to be something wrong with you, or he owes you money, or something along those lines.

The type of person, genuine (used it four times now) football fans want to see do well in the professional game. A combative midfielder in his day playing almost 600 career club games and a hard-working manager to boot.

He will light up the dull, monotonous Premier League, adding character, honesty and the occasional quote of pure comedic genius!!

4. Day at the seaside.  We all love a day out at the seaside, its part of the culture of these fair isles. The temperatures hit the high teens and we pack up the family and the car and head to the coast. Now you can take in a top flight football game as part of the experience. Nana will love it!!

Seriously, it will mean so much to the local economy, with away fans using it as an excuse to head to the seaside for a weekend and spend much-needed money in reviving the local economy and the pubs and clubs too.

I recommend you visit, though yet again I am not liable for this recommendation. Phew!!!

5. EN-GER-LUND.  It is as simple as that, if we aren’t going to allow the Scottish into our leagues then surely it’s best to keep the Welsh out too. All jokes aside, I’m serious about this as we have the Welsh in already, then surely we can’t be arguing against St. Mirren or Cork City wanting in too.

Can we? Keep out all of you, create your own leagues, oh no you’ve already done that, well Cardiff, go play in that league or else!! (I rescind this comment as I think those Cardiff boys like a fight, see reason seven for more)

6. Chopra, Ridsdale, Hamann (pictured below) et al.  I have no reason whatsoever to have any form of hatred towards anyone person associated with Blackpool and their football club, yet Cardiff City seem to want to offer me plenty of reasons to want to see them fail at the final hurdle and laugh out loud.

Michael Chopra, Peter Ridsdale, Sam Hamann, Steven Gerrard’s cousin and well as you can see the list goes on and on and on!!

You know I’m right on these points and the list could go on, nothing personal, no actually it is personal!!

7. Zero Tolerance.  As we enter a crucial period in our bid to host the 2018 World Cup we need to have a zero tolerance approach prior to the bid result in December of this year.

I don’t want to seem stereotypical, but Cardiff fans along with several others have a reputation for enjoying a fight or two with opposing fans, whether it’s based on the Welsh versus the English or it’s just a general theme, I must admit I am not sure.

But, having heard, read and witnessed their fans at first hand, I am pleased they will not be able to take the spotlight and potentially spoil our hosting bid, though let’s be fair, we are more than capable of spoiling our bid ourselves and don’t need any help thank you very muchly!!

Blackpool deserve their moment in the big time and my reasons are purely comedic and light-hearted in their approach. Good luck to the Tangerines when they begin their life in the Premier League.

I truly hope they survive more than one season and, who knows, it maybe Cardiff joining them in 2011/2012.  Personally, as long as Middlesbrough are promoted I don’t honestly care.