Guest Post: 7 Reasons Why Ashton Kutcher Can’t Replace Charlie Sheen On Two And A Half Men

There are many TV shows I have never watched. Emmerdale, Eldorado, Enterprise, Entourage, Everybody Hates Chris, Everybody Loves Raymond, Everybody Is Agnostic Towards 7 Reasons. And others not beginning with E. Including Two And A Half Men. That begins with a T. As a result it would make no sense whatsoever for me to comment on the show. Alina Cambridge on the other hand, well she knows her stuff. That’s why she is on the sofa today stating the case for Ashton Kutcher not to be the new Charlie Sheen. Here’s Alina: 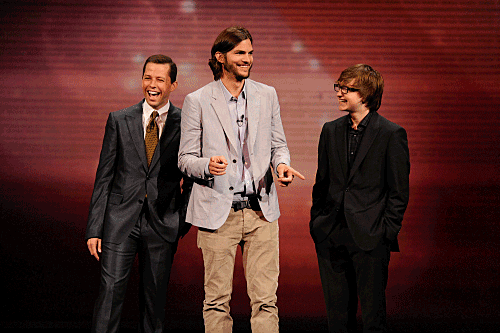 So I am sure we have all heard the news by now. That ’70s Show hippie star Ashton Kutcher is taking on Charlie Sheen’s role on Two And A Half Men. Those are going to be some pretty big shoes to fill, and I’m not sure Ashton is up to the task. Sure they both have a lot in common when it comes to brainpower, but how does their drug use match up? They are both a couple of A-Lister’s, with hot girlfriends, and a whole lot of fans. So lets take a look at the 7 reasons Ashton Kutcher just can’t compete with Charlie Sheen.

1.  Girlfriends. When it comes down to girlfriends, Charlie has the edge. Charlie Sheen has had a number of girlfriends. Currently he has two. Two young porn star girlfriends, and from the looks of it they don’t appear to be jealous or middle aged. On top of that he has had some of the most beautiful women in Hollywood, and he typically doesn’t go for women in there 40s like Ashton. Which is hard to do when you’re a celebrity. Because I am sure a celebrity status gives you no leverage when approaching women. Although I can’t really blame him, I thought Bruce Willis was really cool when he was married to Demi Moore. I was about 12 years old at the time. I can remember thinking how much I wanted to become famous and take care of his kids. I guess it made me stop thinking that Ashton is gay, so he’s definitely “winning” in that aspect.

2.  Drug Use. Now I am not one to advocate drug use, but Charlie Sheen sure makes me laugh when he is bangin’ down 7-gram rocks. Hence I am always laughing. What’s more interesting then watching a celebrity go on a 7-day binge and living to tell the story. While Ashton is punk’ing the public with fake police officers and fabricated stories, Charlie is writing checks to hookers and getting caught. Charlie has defeated rehab a number of times, relapsing every time. Ashton can’t match up to those numbers; rehab would turn him into a church boy. Definitely not what Two And A Half Men needs. We’ve seen Ashton smoke a little grass on That ’70s Show, I’m pretty sure weed is just a filler for Charlie’s joints. Chalk this one up to Charlie.

3.  Family. Charlie Sheen has a family of celebrities to back him up. Martin Sheen has some great films, classics at that. We all loved Emilio Estevez in The Mighty Ducks, and in Demi Moore (Yes they dated). Ha, take that Ashton. Who knows Charlie Sheen may have even put the moves on her once or twice. Regardless, Sheen has a pretty kick ass family. As for Ashton, I think I heard he has a retarded twin brother. So he has that going for him. Next topic.

4.  Endorsements. Ashton may just take this one. He has a pretty successful string of camera commercials. Also lets not forget that first Pizza Hut commercial that launched his pathetic career. Charlie hasn’t really had many endorsements come his way lately, and I’m surprised that Trojan hasn’t bought into Charlie’s act. Then I realized he probably doesn’t wear condoms. However, Sheen has taken up a new business venture as a partner in a line of electronic cigarettes. The “NicoSheen” product will feature the actor’s signature smirk on packages of disposable E-cigarettes and related products. Can’t wait to get my hands on that!

5.  Celebrity. Ashton was the first to get to 1,000,000 Twitter followers, but Charlie was the fastest to 1,000,000 Twitter followers. Charlie did what Ashton did, only faster, probably because of the cocaine. So, they both have a large number of fans but could Ashton ever pull off a tour around the US in the same way Charlie did? I don’t think so. Charlie sold out venues just so people can hear him spew his nonsense all over the stage. You know you have star power when you can do that.

6.  Religion. Ashton Kutcher is a self-described fiscal conservative and social liberal. He is a student of Kabbalah, whatever that is. His co-star, Natalie Portman, stated in 2011 that Kutcher “has taught me more about Judaism than I think I have ever learned from anyone else.” On the contrary, Sheen is a self-destructive fiscal renegade and social degenerate. He is a student of Keith Richards. Natalie Portman had this to say about Sheen, “Charlie has taught me more about reverse cowgirl, than anyone I’ve ever met.” Winning.

7.  Lifestyle. Charlie Sheen was very lucky to land the part for Two And A Half Men. I’m confident he thought he was in a reality show and just didn’t know the truth. Only after finding out there were scripts did Charlie get the boot. He got paid to act exactly like he does in real life. Two and a Half Men could possibly turn into the worst show ever if Ashton treats the show like his real life. No one wants to see poor old Ashton being dominated by the Alpha Female that is Demi Moore. It will ruin the dreams of all men who tune into the show. Only time will tell to see who gets better TV reviews.