7 Reasons The News of the World Should Hack My Phone

Breaking News:  Sienna Miller has received a payout of £100,000 in damages from the News of the World as compensation for hacking her phone.  This seems like a nice bit of business for her, but not such a good deal for them.  But I have a better one.  I would like to propose that the News of the World hack my phone as I believe it would be a mutually beneficial arrangement.  Here are seven reasons why. 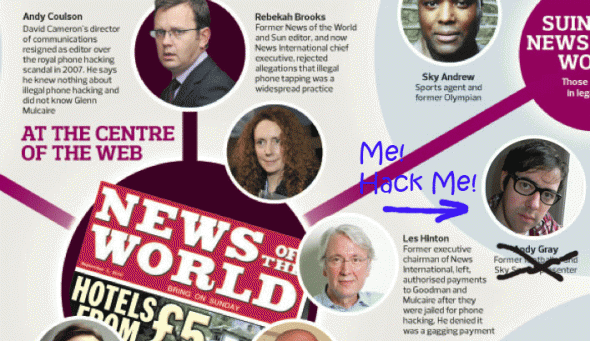 1.  It Would Be Easier.  I don’t mind the News of the World hacking my phone.  I’ll quite happily consent to it (on my terms).  That means that you’ll have to spend a lot less time and money on skulduggery and post-hacking legal fees.  Sure, there’ll be less exposure if it’s legal, but the savings will more than offset the loss of free publicity.  And the News of the World will be able to stop reporting on the goings on at the News of the World every week, so your staff would be able to get out of the office and get some fresh air.  They’d like that.  You’d have a happier, healthier work force.

2.  It Would Be Different.  The tabloid papers are full of stories telling us what celebrities are wearing on the beach and it’s always a bikini that reveals super sizzlin’ so and so’s superb post-baby beach bod/frumpy formerly fab actresses new-found flab/supermodel’s cellulite horror! (delete as appropriate).  I don’t own a bikini and display none of those things on the beach so would be a genuine point of difference for your paper.  Surely there are people out there that would rather see pictures of a man on a beach dressed in a shirt, jeans and a sensible pair of brogues cavorting with a bag of chips or pointing at a donkey.  I also make sandcastles.

3.  It Would Benefit My Friends And Family.  And that’s important.  As a fellow practitioner of the Jonathan-Lee-Method-of-Telephonic-Acknowledgement, I too ignore the phone a lot, as I’m usually busy doing something else; often something to do with writing, babies or writing about babies.  This means that I can be quite hard to get hold of.  If you hacked my phone then everyone that calls me for information would be able to keep up with what I’m doing in your newspaper and there’d be fewer calls for me to ignore.  That would greatly benefit both my friends and the woman with the monotone voice that tells me how many messages I have.  She must be quite tired of it.

4.  It Would Benefit Me.  I often don’t know what I’m supposed to be doing or where I’m supposed to be on any given day and my life seems to be an endless whirl of almost-missed appointments and sudden changes of plan.  If my phone was hacked, I could read about what I was supposed to be doing that day in the morning paper.  That would be a big help.  That would save me from buying the diary that I never use once a year and it would save my wife from leaving notes stuck to the espresso machine for me to find in the morning.

5.  It Would Be Interesting.  I’ll level with you: I know almost nothing about Sienna Miller.  She probably spends her time swanning about* in yachts and near red carpets in a gown; I just don’t care enough to find out.  I do, however, know loads about myself so it stands to reason** that I’m more interesting than Sienna Miller.  Who wouldn’t prefer to find out about the lifestyle of a York-based, tiramisu-obsessed father and humourist?  I visit quilt museums and send texts about the war.  That’s the sort of stuff that will really shift papers.

6.  It Would Generate An Additional Revenue Stream.  About 60%*** of my voicemails are from people asking where I am, usually because I’m late or in the wrong place or forgot I was supposed to be somewhere because I didn’t write it down/have time to make a coffee.  With phone location and Google Maps though, it would be possible for a live Marc-location to be streamed on the News of the World website.  At any given moment readers could find out where I was.  I could find out where I was.  And where I’d been too.  I could also pretend to be a glamorous international gadabout by posting my phone to friends overseas. I’d like that, and the subscribers to the Marc-Locator, the Map-o-Marc, the Marc-o-Loco-Tron (I’ll work on the name) would doubtless find it thrilling.  I’d definitely subscribe.

7.  I’m Cheaper Than Sienna Miller.  I’d quite happily settle for £50,000 to have my phone hacked by Rupert Murdoch.  For that, he can have the voicemails, the text messages, the live GPS location, the conversations with my sister about how to dismantle a travel cot and the pictures my wife takes of the cat when I foolishly leave my phone unattended.  At £50,000, I’m a bargain.   Hack me!

**If we don’t subject this statement to a rigorous analysis.

***Made up figure: I’m not so dull that I spend my time cataloguing and categorising my voicemail messages.