1.  History.  In Victorian Britain, you could barely move for ragamuffins up chimneys and urchins being put to work in blacking factories.  Not to mention girls in t’mill or plying their trade as occasional flower-vendors.  And Britain was the most prosperous, powerful and advanced society of the age; all built on the ruthless exploitation of children.  Trick-or-treating our way out of the deficit is essentially a more modern and palatable version of the Victorian model.  History commands us to do it.

2. Big Society. Love them or hate them, the Tory flagship policy is something called the ‘Big Society’. The premiss, if we understand it correctly, is that it empowers local people. Demanding treats from old ladies is also pretty empowering. Some people, especially those with chainsaws, are really good at getting big treats. Logic dictates therefore, that trick-or-treating is right up Big Society’s street. Which is convenient as this is where we should all be going on Sunday night. With or without tree surgeon utensils.

3.  Balance of Payments.  Americans are the greatest per capita consumers of confectionery in the world*.  Having trick-or-treated vast quantities of sweets from our neighbours, we can export them to America.  Not only will this be a healthy profit for Britain, it will also be a healthy profit for America; the nation that owns most British sweet manufacturers.  This perpetual transatlantic sweet transaction will enrich both nations to the point where they will be able to rid themselves of their burdensome debts and counter the economic threat of emerging nations such as China and India.**

5.  Pumpkins. Most people who knock on doors and ask for a donation carry charity boxes. The volume of these is seldom satisfactory and rarely saves so much as a tin of tuna let alone a Whale. A pumpkin however can be very satisfactory in size. So, once you’ve hollowed out your pumpkin – but before you’ve made eyes and stuck a candle inside – whip up and down the street a few times. Actually, make it once. People might get annoyed/poor if you get repetitive. Oh, and once you’ve finished with your pumpkin, sell it. Ideally to Americans. They wear them on their heads. 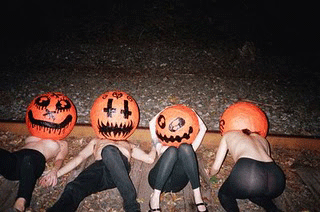 6.  George Osborne. Only time will tell, but given the current economic climate it is likely that Osborne will go down in history as either a genius or a buffoon. It’s fair to say, that at the time of writing, many people think he is a buffoon and they’d like to give him a slap on the chops. To others though, he is seen as a strongly-willed man making tough decisions when they are required. These people want to shake his hand. Sadly, George doesn’t have enough hands or chops to go around. Which is where this genius 7 Reasons idea comes in: Many people like dressing up and wearing masks when they set about trick or treating. This year all trick-or-treaters should wear a George Osborne mask. This way, for one night only, people all over the land get the chance to slap or shake the Chancellor.

7.  They Shoot Horses, Don’t They? In the Great Depression (the last time things were this bad) people kept themselves entertained by participating in many dubious activities and entertainments: Dance marathons, jigsaw puzzles, penny-a-card bingo, pointing at aeroplanes and beating hoops with sticks were all popular leisure activities during the 1930s.  By using these soporifically tedious activities to distract themselves from the straitened economic circumstances and widespread hardship, people were able to gaily throw their woes aside and the national mood – in contrast to the economy – was one of buoyancy.  In 2010, we can learn from the past.  By participating in something as brain-achingly tedious as walking up and down the street in the cold and meeting the neighbours – or ceaselessly answering the front door and meeting the neighbours – we will improve national morale and, with a new, breezy confidence to fortify it, the nation will boldly march its way clear of the deficit.  And all because of trick-or-treat.***

*We assume, based on having seen them.

**This should work.  We have no idea why “professional” economists didn’t think of this sooner.

***The 7 Reasons team can be hired for the writing of manifestos and speeches and are willing to discuss the exchange of principles for money.  Or tea.  Or tiramisu.