Hello it’s Jon again. I know you weren’t expecting me again today – I wasn’t expecting me again today – but here I am. In my third and final attempt at reliving my childhood, I have decided to go all the way back to 1983. The year of my birth. On Christmas Day 1983, I was given a bear. Humbear. (He was the official bear of the Humber Bridge. Obviously). For many years he never left my side. So, in a bid to recreate the joys I once had, I am going to spend a day in the company of a cuddly toy. Unfortunately, Humbear isn’t with me. He’s at my parent’s house. So I have had to substitute him. And into Humbear’s place comes my girlfriend’s lamb, Lamb. (This is not his official name). Lamb and I spent a whole twenty-four hours together. And it was great. Truly great. 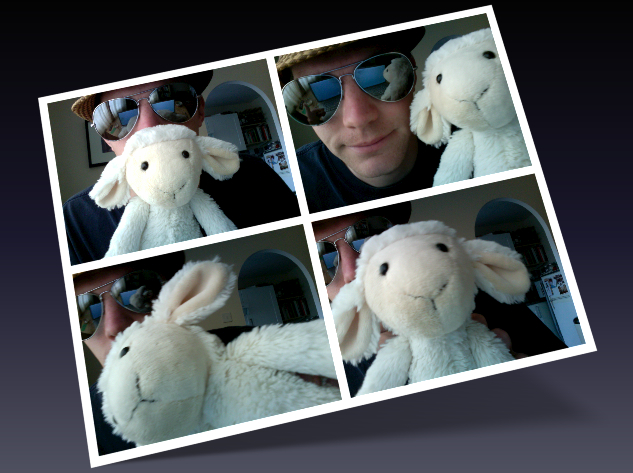 1.  Lamb Can Fly. One of the things I have always regretted, is that Humbear always landed on his head whenever he slid down the handrail. Lamb doesn’t. Lamb bounces. Off his rather rotund chest. And then he sits upright. Ready for another go.

2.  Lamb Can Dance. I learnt all my dance moves from Humbear, which explains a lot. Mostly why I prefer to do all my dancing sitting down ignoring the dance floor. If I had had Lamb on Christmas Day 1983, I dare say no one would credit the moonwalk to Michael Jackson. No matter what comes on the radio, Lamb does know how to have a good old bop. I did question his moves to Celine Dion’s My Heart Will Go On, but I shouldn’t have done. If we all liked the same things the world would be very boring.

3.  Lamb Can Play Cricket. Not matter how much I coached him, Humbear was quite a poor cricketer. He never seemed to learn and sadly had to retire from the game in circa 1989 after he was called for chucking a record 347 times in a row. Lamb though, well he’s quite a different character. Rather wonderfully, he doesn’t have much stuffing under his arms and so they actually move. A full 360 degrees at the shoulder. As a result he is quite rapid. Even if he does suffer from Harmison-itis.

4.  Lamb Doesn’t Get Bored. Humbear, despite all the epic adventures he shared with me, always had a habit of looking very bored. Whether this was actually the case or whether it was just because the person whole made him stitched his mouth on upside down, I never discovered. Thankfully, Lamb comes with a positive attitude to life. He just sits there, watching me work, loving every minute of it. Whenever I look up, he is there, smiling away. It makes one very proud of the little fella.

5.  Lamb Doesn’t Eat Biscuits. To this day, I am still convinced it was my Dad who stole the biscuit and implicated Humbear in the whole affair. Though, at the time, I may have believed him. Thankfully, Lamb doesn’t like biscuits. He just sits there, watching me, munching away. And he seems to enjoy the spectacle. So I have another one to entertain him.

6.  Lamb Is Happy To Sleep On The Floor. I was always too scared to let Humbear sleep on the floor. I thought he may run away in the night, torn up inside by my rejection of him. As a result, he always slept in my bed. And to this day, he still does. At least he does when I’m not there. Lamb is very different. We came to an agreement. Whoever won the pillow fight, got to sleep in the bed. It wasn’t a long fight.

7.  Lamb Doesn’t Miss Me. I always felt incredibly guilty about leaving Humbear alone if I had to go to school or play in the garden or hide him under the bed if a friend came round to play pirates. Thankfully, I don’t feel a shred of guilt about leaving Lamb alone when I go to play pirates with my friends. I say friends. They are more local school children. And I like to roar at them from behind bushes. Still good fun though. Anyway, Lamb is very happy not coming with me. He stays in bed with Big Bear and Strong Yoghurt. Again, not their official names.

*Many thanks to Claire for the loan (albeit unknown) of Lamb.