7 Reasons That the Summer 2010 Lakeland Catalogue is Amazing

The Lakeland summer 2010 catalogue only arrived at our house yesterday.  I don’t know how I’ve survived the early part of the summer without it.  It provides us all with a glimpse into the future.  In fact, it’s amazing.  Here are seven reasons why.

1.  The Dishwasher Smellkiller.  This amazing device kills dishwasher odours stone-dead.  I’ve never used one before, so the inside of my dishwasher must stink to high-heaven.  I’ve always foolishly assumed that the only way to remove smells effectively is to sterilise the cause of them.  And the only device I have that’s capable of sterilising things on a large scale is my dishwasher.  And I can’t very well put my dishwasher into that, can I?  But now the people at Lakeland have solved the problem of pungent sterile environments with the dishwasher smellkiller.  They’re amazing, they think of everything.

3.  The Metallic Shelf Liner.  Because nothing in your kitchen will say homely and wholesome more than lining your cupboards with a detailed industrial diamond plate metal texture.  It’s what Mad Max would do.  It’s repositionable too, enabling you to move it about within your cupboards, making it both stylish and fun.

4.  The Three Pan Protectors.  Sometimes, due to space issues, you may be forced to stack pans inside each other.  With a heavy heart and nagging conscience, you’ll place a pan inside another pan, knowing, just knowing, the devastation that your reckless action may cause, but wait…just wait!  The good people of Lakeland have the solution to all pan-damage.  They will provide you with three machine washable pan protectors for only £4.99!  And they don’t resemble sanitary towels in the slightest.

5.  In The Bedroom.  There comes a point, later in the catalogue, when the lettering changes to pink and the “in the bedroom” section begins.  I must say, I felt a frisson of excitement when I saw this.  Ah, at last, the bedroom.  What wondrous, sensual gadgets do Lakeland have in store for the bedroom?  The Lakeland goose-feather-erotic-tickler?  The Lakeland hand-held telescopic five-way mirror?  The Lakeland ambient cellulite-flattering nightlight?  No.  More unexpected than any of those things.  Brace yourself.  It’s the Lakeland padded trouser hanger. 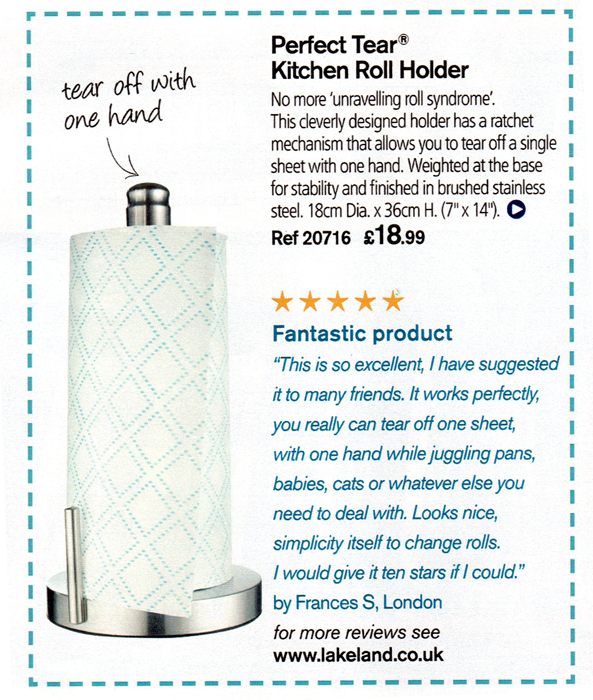 6.  The Perfect Tear Kitchen Roll Holder.  It’ll banish ‘unravelling roll syndrome’ from your kitchen forever.  I know I feel relieved.  The catalogue picture demonstrates how it works:  You just tear off the metal knob at the top with one hand, and that will put a stop to the problem of kitchen-roll-unravelling.  It’s a wonder of the modern age.  There’s even testimony.  Frances S of London has “…suggested it to many friends…” presumably before they attempted to drown themselves in their soup, but wait…Frances S isn’t the stupefying dullard that she might initially appear to be, as she goes on to reveal that,  “…you really can tear off one sheet, while juggling pans, babies, cats or whatever else you need to deal with.”  Wow!  She’s awesome!  Frances S is a cat-and-baby juggler.  Who wouldn’t pay to see that?  I wish they’d put a picture of that in.

7.  The Over-Door Storage Rack. “Oh No!” I can hear you thinking. “He’s going to make fun of the over-door storage rack“.  Not bloody likely.  After all, the giant has one of those in his kitchen, as this lady discovered.

And that’s it.  I’ve reached seven reasons.  And I didn’t even get the chance to mention the castor cups which “stop unsightly dints” or the willow stair basket.  I’ve left the pictures so that you may marvel at them both. 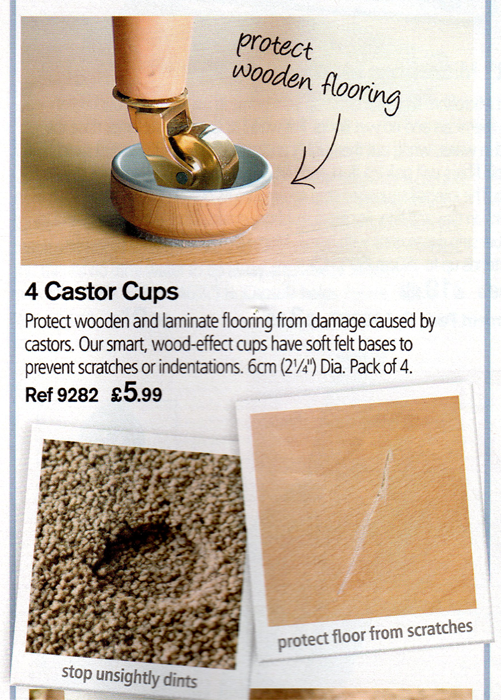