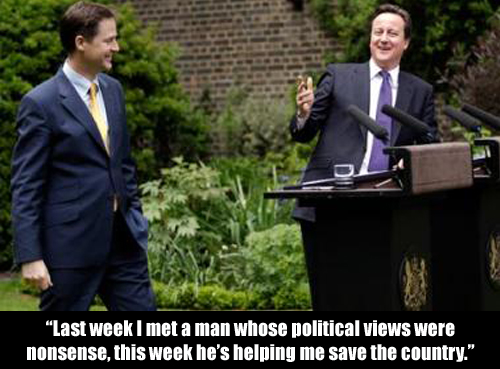 Yesterday I watched David and Nick in the garden. I don’t know about you, but I kind of liked it. I felt a sense of profound optimism. Maybe it’s me. Maybe I am deluded. Maybe my sense of profound optimism combined with my natural optimism has made me go completely loopy, but I think it might just work. I think it might just be great under Dave and Nick. And here’s why:

1.  It’s In The Names. The meaning of David is beloved. The meaning of Nick is victory of the people. That sounds good to me. Incidentally the meaning of Gordon is large fortification. Which probably explains why it took so bloody long to get rid of him.

2.  It’s In The Colours. Anyone who went to school and paid attention when they accidentally knocked over the blue and yellow paint bottles, will know that, when combined, they make green*. You know what this means. The environment. David and Nick are going to save us from Global Warming. Caroline Lucas must be furious.

3.  It’s In The Hands. As luck would have it, David and Nick seem to favour opposite hands. As the above shows, David likes his right and Nick likes his left. This means of course that they have two spare hands that meet in centre ground. Genius.

4.  It’s In The Hair. It may be May, but that means sod all in this country. The weather is still unpredictable/predictably rubbish. As I have pointed out, yesterday David and Nick were in the garden. The sun was out but it was chilly and a tad windy. Miraculously though, for forty minutes, their hair acted superbly. Not once did either of them so much as touch their coiffures. It was the kind of strong, stable hair that this country so badly needs.

5.  It’s In The Wives. Neither Samantha or Miriam – that’s Mrs Cameron and Mrs Clegg if you are not on first name terms yet – seem particularly keen on the limelight. Which is good. Because they have a job to do. Run our country. Don’t be fooled, David and Nick don’t really know what they’re doing. And they are married men. Their wives tell them what to do. So for the next five years Great Britain will be run by a creative director and a Spanish lawyer. Mandelson and Campbell, eat your hearts out.

6.  It’s In The Looks. It’s quite useful that they are called the cabinet because that is what most of them look like. And so they should. It’s brains you need in politics, not beauty. The last thing we need is for Theresa May to be distracted by a six figure sum to pose naked for Playboy or for Ken Clarke to get his braces off for the centre-fold of Cosmopolitan. Thankfully – for all our sakes – that isn’t going to happen. It’s going to be all work and no play for David and Nick’s boys. And girl.

7.  It’s In The Logos. No one in the world has picked up on this yet. But that is why I am me and the rest of you do interesting things with your time. The Conservative logo is a tree. The Liberal Democrat logo is a bird. Birds like trees. It’s where they live. You couldn’t make this stuff up. If this coalition was destined to fail the Liberal Democrat logo would have been an axe. But it’s not. It’s a bird. And David has let it into his foliage. Bravo.

*Yes, if it is pure blue and pure yellow it would turn black, but that’s the point. It’s a coalition. All purity has been thrown out of the window.

NB: I might not believe all of the above nonsense.