7 Reasons That The BBC Election Night Coverage Was Weird

1.  Fiona Bruce. Bizarrely, for their election special, the BBC decided to segregate the sexes, with the men downstairs and the women upstairs.  Queen of the woman-zone was – of course – Fiona Bruce.  She was obviously so determined to be seen as the prettiest of them all that she appeared to be wearing all of the make-up.  I don’t just mean foundation, concealer, blusher and mascara (I have just reached the limit of my make-up vocabulary), I mean the BBC make-up department’s entire stock of everything.  It was extraordinary.  Her face appeared to be entombed in concrete.  She’s noted for being calm and cool, but if she’d become hysterical during the broadcast it wouldn’t have become apparent until next Wednesday.  They’re probably still trying to excavate her chin now.

2.  Dimbleby. Down in the man-area David Dimbleby was firmly in command.  Seated at the big table, he exuded authority and unflappable professionalism.  Of course, there’s no reason that he shouldn’t have, he’s been covering elections since Gladstone was in power.  I checked Wikipedia on election night to find out Dimble’s age and discovered that he is a hundred and fifty-four, and that he is immortal.  Thanks Wikipedia. 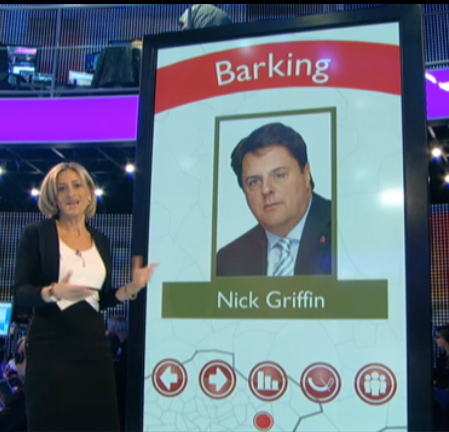 The iMonolith. It's very perceptive.

3.  2010: A Geek Odyssey. Also upstairs in the woman-zone was Emily Maitlis.  She was in possession of some extraordinary equipment; she had something that looked like a giant iPad (an iPad Maxi, perhaps).  I wondered at first if it was a regular sized one and they’d shrunk Emily Maitlis, but that turned out not to be the case.  It looked familiar, but I couldn’t quite work out why.  Then it struck me.  It was like a cross between an iPad and the monolith from 2001: A Space Odyssey.  Presumably across the nation, Apple-obsessed-geeks were gazing in awe at the iMonolith, drooling, and thinking “I want one”.  That was pretty much what I was doing too, though I wasn’t looking at the iMonolith.

4.  Tradition. One of the best election night traditions that the viewer can participate in is the time-honoured custom of being aggravated by the ridiculous and vapid CGI effects that Jeremy Vine uses to illustrate election night events.  Appearing baffled, rolling your eyes and criticising the stupidity of the CGI is the viewer’s traditional role on election night – it’s like being Paxman – but this year, something strange happened.  I understood all of the graphics; I wasn’t annoyed by them; I didn’t feel patronised by them; in fact, they were quite good.  I don’t pay my licence fee to not be annoyed by the election night graphics.  It is my right.  Next time, I expect them to spend more money on them and make them as vast, preposterous and inscrutable as usual.

5.  Paxman. The third inhabitant of the woman-zone was everybody’s favourite pantomime dame, Jeremy Paxman.  My god he was furious.  Perhaps he was cross because he’d been put upstairs with the ladies away from the big table, or perhaps it was because Dimbleby refuses to die.  Whatever the reason, he was angry, short-tempered and petulant throughout the broadcast.  It’s a shame to see that a once fine broadcaster has become such a parody of himself.  Even having two laptops wasn’t enough to placate him.  He looked like a man who didn’t want to be there and I hope he gets his wish.

6.  The Luvvie Boat. To cover an election that the Tories (who have promised to slash the BBC budget) were widely expected to win, the BBC chose to spend a vast amount of money giving free booze to celebrities on a swanky boat moored on the Thames.  They’re obviously idiots.  Captaining the good ship Lollygag was Andrew Neil, a man so creepy that spiders shriek and stand on chairs when they encounter him.  It was Neil’s job to elicit the opinions of drunken celebs on the election and in this he was successful.  Unfortunately, as is often the case after a lot of drink has been taken, the views being expressed were not as coherent and insightful as they might otherwise have been.  Probably the best slurrer of the evening was Kirsty Allsop.  I can’t remember exactly what point she was trying to make, and she probably can’t either.  The soberest person on the boat appeared to be Bruce Forsyth, but his opinion wasn’t helpful either because he’s clearly mad.  There is nothing in the world that can be improved by knowing Brucie’s opinion on it.  Nothing.

7.  The Result. We’re still waiting for the result, it’s been four days!  Hurry up.