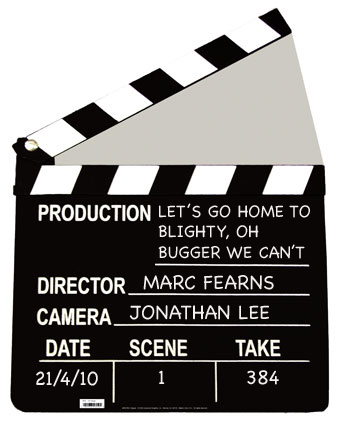 1.  The Plot Bit. Think Love Actually meets Planes, Trains & Automobiles (without the planes) meets The Day After Tomorrow. Various people stranded in various places have to find various methods of getting back to the UK for various of reasons. It’ll be a romcom/thriller.

2.  The Product Placement Bit. The 7 Reasons team isn’t stupid. We know that slipping in a few products will boost our coffers. That is why Ash’s entire back catalogue will be on display in the majority of scenes. Ashes To Ashes will be shown on all TV screens. Unless it’s in a hotel room where the occupant may choose between Ashes To Ashes, The History Of The Ashes or The Arthur Ash Story.

3.  The Cast Bit. All the usual suspects will be there. Hugh Grant. Colin Firth. Emma Thompson. Rowan Atkinson. We’ll find them something to do. We’ll also bring in Colin Farrell to liven up proceedings. He’ll be monk. Though a monk who has escaped from his monastery after being accused of sneaking into the local nunnery of an evening and having his evil way with a couple of habits. The head monk is after him. So is the head nun. The nun isn’t wearing anything. This is not a 3D film.

4.  The Political Bit. Hugh Grant will be the leader of the opposition. He has just been in Washington DC (with Gary Barlow) meeting the President – who will be played by either Morgan Freeman or Denzel Washington. It really depends who is cheaper. They won’t have a speaking part. Hugh Grant then needs to get home to vote in the election and then pick up the keys to Downing Street from it’s former occupant. Who will be played by Eddie Izzard. His wife will be Carole Smilie.

5.  The Romance Bit. Colin Firth is a writer – probably working on something Shakespearean – he has been on a writer’s holiday in Spain and now needs to get back to London because he also has a part time job in Waterstones. He misses out on hiring the last available car in Barcelona so jumps up and down a bit on the pavement and looks angry. A Spanish girl pulls up in her hire car and – in broken English – asks Mr Firth if he would like a lift to London. Col says yes and before you know it they are on a road trip together. We’re not quite sure how the drive will go but they’ll be having a good old snog come Dover. Of that you can be sure.

6.  The Sad Bit. Bill Nighy is the owner of a Formula 1 team. He’s stuck in Shanghai after the Chinese Grand Prix. While he’s waiting for a plane in the Chinese version of Starbucks, he gets a phone call from his daughter. Bill’s wife has been in an accident and is in a critical condition in hospital. Bill starts walking home. At the end of the film he is still walking. This is our ticket to a sequel.

7.  The ‘He Should Be Dead. This Is So Unrealistic’ Bit. Dennis Quaid is a volcanic expert. He was inside the volcano when it started to erupt. The Icelandic name for the volcano is Eyjafjallajökul, but for arguments sake we’ll call it Volcano Mrs Robinson. So Dennis was inside Volcano Mrs Robinson when she started blowing off. Dennis’ English wife thinks he’s dead. But as this is a film, she is the only one. He’s blatantly alive. Everyone knows it. We wouldn’t have cast Dennis Quaid just to kill him off in the first five minutes. If we wanted to do that we’d have cast Ben Affleck. Anyway, Dennis makes it back to his wife in one piece. Bar a touch of sunburn/frost-bite.