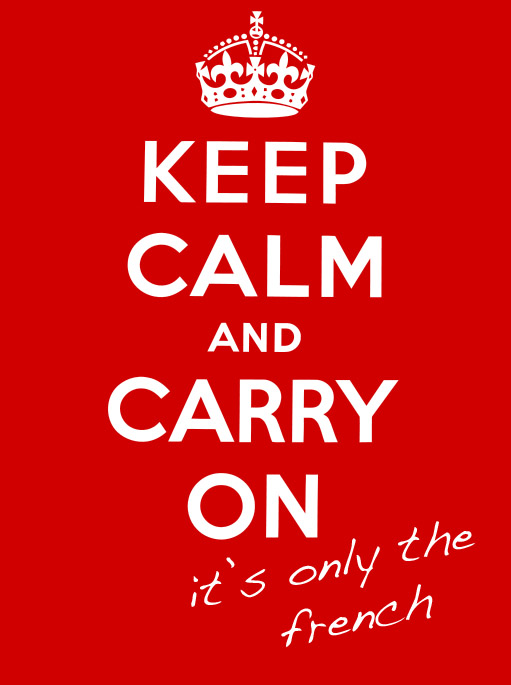 1.  Language. A successful French invasion would result in the British speaking French. That’s not happening. The British have about as much interest in learning French as they do in my trousers. They are also incapable of learning something so… well… pointless. (The British I mean, not my trousers. Though, come to think of it, my trousers are fairly incapable in that department too). The fact is, we Brits just wouldn’t turn up to the classes. The French would eventually get fed up and go home. Then they’d find that while they were out for the day we took over. Genius.

2.  Beaches. The French have dainty little feet. It’s a well known fact, in my mind, that they spend 56% of their time in the bathroom moisturising their toes. If they try and invade by boat it means making an assault via our beaches. These are made from stone. That’s enough to make them turn around and run out of petrol in the middle of the English Channel. Please note that name. The English Channel. None of this French Chanel No.5 rubbish.

3.  Flights. Attempting to invade by plane would be particularly stupid as most of the planes destined for Heathrow get diverted to Charles de Gaulle anyway. Or Luton. Both are pretty horrendous.

4.  Time Difference. The French are an hour ahead of the British. Not in common sense, just in time. Supposing the French finish work at 5pm their time. It would take them two hours to get to London. That would be 6pm our time. Rush hour. Told you they didn’t have common sense.

5.  Food. There is no point in invading and then going home for tea. We’d just take our country back. The French would actually have to occupy the UK. This would mean eating British food. Well they’re not going to do that are they? Who wants a plate of fish and chips when you can have frog’s legs dipped in snail fluid?

7.  Scared. The French are big pansies. In the early 1800’s Nelson had both the French and Spanish fleets blockaded in at Toulon. Instead of fighting back, they slipped through the back entrance. (A nasty habit). Nelson ended up having to chase them all the way to the West Indies. And back again. And they still didn’t bloody engage in battle. If that is their attitude how could they possibly invade the UK? They’d run away crying if the foghorn on the Calais to Dover ferry was a bit too loud.